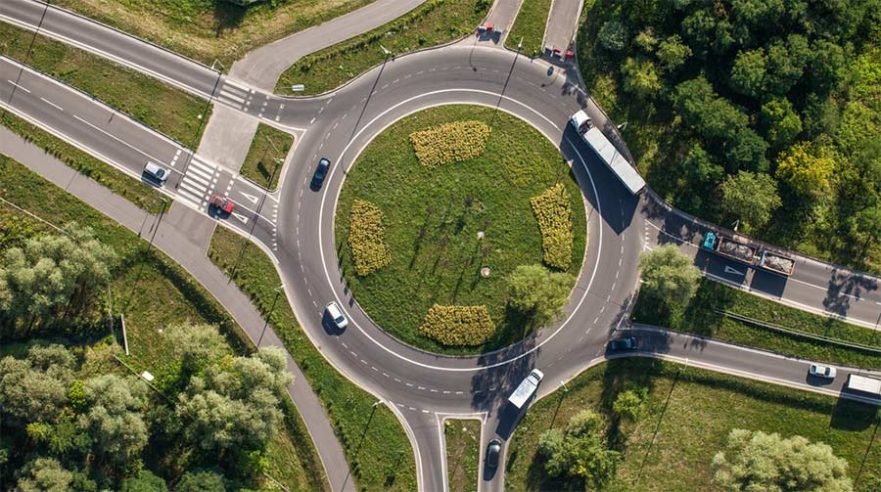 Statistics proving roundabouts to be a safer and more efficient method of controlling traffic flow at intersections is one of the reasons more drivers, pedestrians, and bicyclists encounter them as they travel through Oregon.

It is difficult to argue with a 78-82 percent reduction in intersection accidents resulting in serious injuries or loss of life, but a close look at roundabout advantages and disadvantages reveals they may be responsible for an increase in other types of accidents and could pose challenges for pedestrians.

What is a roundabout?

The flow of vehicles through a traditional intersection is controlled by a traffic signal or stop sign. A roundabout is a circular roadway with a center island. Vehicles enter the roundabout from roads connected to it and travel in a counterclockwise direction to reach another roadway, where they exit and continue on their way. The design eliminates the traditional intersection in favor of a constant flow of traffic entering and exiting without interruption.

Roundabouts, which can be either single- or double-lane, do not use traffic signals or other traffic control devices. Instead, they rely upon drivers entering the roundabout to yield to vehicles already traveling on it. This increases vehicle capacity over traditional intersections by 30-50 percent because traffic is allowed to move continuously without being forced to stop at a stop sign with driver’s failing to correct yield to who has the right of way or traffic signal.

Roundabouts’ benefits may come at a price

Intersections where roundabouts replaced traditional stop signs and traffic signals to control vehicle movement showed a 37 percent decrease in collisions and a 75 percent reduction in crashes in which someone suffered an injury. Studies of single-lane roundabouts describe the following safety factors associated with them:

According to reports of a study conducted in Wisconsin, roundabout accidents resulting in serious injuries or death went down, but the total number of overall collisions went up by 12 percent. The researchers cited the circular design of roundabouts as contributing to motorists crashing their vehicles by driving them off the road.

Multi-lane roundabouts may contribute to crashes caused by motorists who find themselves in the wrong lane and unable to exit onto their desired road. Vehicles swerving or abruptly changing lanes can collide with cars and trucks in the lane next to them or cause an accident as other vehicles attempt to avoid hitting them.

Pedestrians also benefit from the safety factors associated with single-lane roundabouts, such as improved visibility and slower-moving vehicles, and the center islands offer a safe place for them to wait for a break in traffic when crossing. The failure of drivers to yield to pedestrians at crosswalks can be a problem with roundabouts.

Multi-lane roundabouts offer an additional challenge at crosswalks. A pedestrian could become trapped if a vehicle in the nearest lane stops to allow the person to cross while a car or truck in the next lane continues on without yielding.

Elderly or visually impaired pedestrians may experience difficulty detecting breaks in traffic moving through a roundabout. The lack of a predetermined break in the flow of traffic, as occurs with a stop sign or traffic signal, could make it difficult for some pedestrians.

Consulting an attorney when accidents occur

Proving who is at fault in causing an accident is essential when an injured party seeks compensation. An Oregon personal injury attorney like Bailey and Yarmo is an excellent source of advice and guidance for the victim of a roundabout accident.