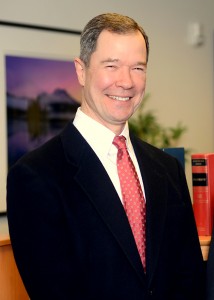 Jim Bailey has been practicing law since 1985. Currently his practice includes workers’ compensation and personal injury for Bend, Redmond, Madras, La Pine and much of Central Oregon. After serving as a law clerk in the State Supreme Court of Louisiana, Mr. Bailey practiced general litigation for seven years, specializing in complex cases and state and federal appeals.

In 1992, Mr. Bailey became a professor at Lewis and Clark Law School in Portland. He has written numerous articles on a variety of legal issues and has lectured in the United States, Great Britain and Japan. In 2000, Mr. Bailey received a Fulbright Scholarship, lecturing and studying in Japan. Upon returning to the United States in 2001, Mr. Bailey returned to the full-time practice of law in Bend.

Jim grew up in New Orleans, Louisiana. Before going to law school he taught English at Louisiana State University. In his spare time he writes, reads, hikes, paints and cheers for the New Orleans Saints.